There is some shelf wear on the box

The 1994 Impala SS went into production on February 14, 1994, at GM's plant in Arlington, Texas,and was almost identical cosmetically to the concept car, the only noticeable change being the chromed bowtie logo on the grill (vs. a red logo on the concept). The car was, in essence, a high-performance version of the Caprice heavily based on the Caprice 9C1 police package. As such, it got much of the equipment formerly available only to law enforcement and government agencies. This included a sport-tuned suspension with reinforced shocks and springs, a high-capacity reverse-flow cooling system (derived from the Corvette's LT1), four-wheel disc brakes, transmission cooler, dual exhaust, a higher-output electrical system, and other minor mechanical and electrical alterations. The Impala SS did not get the 9C1's external oil-to-air engine oil cooler, nor were all the body mounts secured (the standard Caprice and Impala SS were assembled at the factory with the front three body mounts missing one of the rubber cushions, while the 9C1 was assembled with all rubber cushions in place).

The Impala SS was fitted with a standard 3.08 gear. The limited-slip rear differential was standard (as opposed to the optional G80 on Caprices) and the suspension was an inch lower. A retuned LT1 5.7-liter (350 cu in) small-block V8 was standard on the Impala SS, making 260 hp (194 kW; 264 PS) and 330 lb⋅ft (447 N⋅m) of torque (retuned from the prototype's 300 hp (224 kW; 304 PS) rating). The primary difference between the LT1 in the Impala and the LT1 that was in the Corvette and Camaro was that the Impala engine was fitted with cast-iron cylinder heads instead of aluminum ones, and a camshaft that was designed more for low-end torque than high-end horsepower. Another difference was that the block casting for the Impala LT1 had two-bolt main bearing caps while the casting used for the Corvette LT1 had four-bolt main bearing caps. The transmission was the 4L60E, which was an electronically controlled version of the previously hydraulically controlled 4L60. However, the transmission was not beefed up for the power of the LT1, nor the extra weight of the body and frame, and transmission failures after 100,000 miles (160,000 km) were commonplace.

The Impala SS received body-colored trim, a unique single-bar grille with no hood ornament, and a rear deck spoiler. It was fitted with 17-inch (430 mm) brushed aluminum wheels with 255/50ZR17 all-season tires. Inside, the car came with a central console with cup holders (1994 and 1995 models) and a storage compartment, leather seats embroidered with the Impala SS logo, and a standard leather-wrapped steering wheel. For the 1994 model year, it was available only in black with a gray interior. Due to a shortage of the unique five-spoke aluminum wheels, only 6,303 cars were sold. However, the wheel shortage was remedied for the 1995 model year and 21,434 cars were sold.

In 1995, Dark Cherry Metallic and Dark Grey Green were added as exterior color options, and the body paneling on the rear quarter panel was altered to reflect the cosmetic effect formerly achieved by a window insert. Another change from 1994 was the placement of the side mirrors from pods attached to the door to a larger format attached to the 'A' pillar. 1996 was the last year of production with 41,941 units sold. The 1996 Impala SS was also exported to the Middle East, as the Caprice SS, with the car being identical to its American counterpart except for the side fonts on the rear quarter panel and the badge on the dashboard saying Caprice SS. The 1996 Impala SS production went late into the model year; the last one being produced on December 13, 1996. It saw minor interior alterations, with the digital speedometer being replaced by an analog one, along with a tachometer. The shifter was moved from the column to the center console, and the engine was given an OBD-II computer control system (the camshaft was reground to adjust for the new computer). 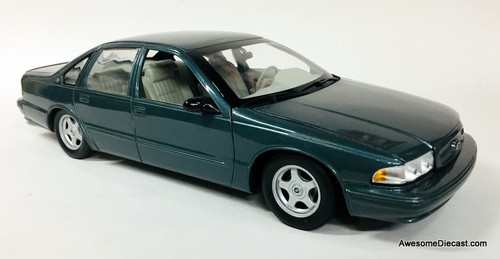