There are only 500 of these pieces produced world wide

The ZIL-4104 was a limousine built by ZIL from the late 1970s to the early 1980s, when it served as the transport of the elite of the Soviet Union. It is estimated that no more than fifty cars were produced each year.

Among its special features were special laminated windscreen and triple-layered windows, supposedly offering protection from radiation in case of nuclear attack, plus duplicated systems, including dual ignition, two 74-amp batteries in parallel, and two fuel pumps.

The console and dash were covered with Karelian birch 10 mm (0.39 in) thick, and the rear seat controlled radio (a Riga receiver), power windows, heater, and air conditioner; in the console in front was a Vilma cassette player.

The fuel tank was 120 L (32 US gal; 26 imp gal) and the car used leaded 95 octane petrol, getting 22 L/100 km (As official state cars, the ZIL-4104s were "built under conditions of strict secrecy" and were "maintained in closed garages by a special division of the KGB", with everyone involved in building and servicing them sworn to secrecy 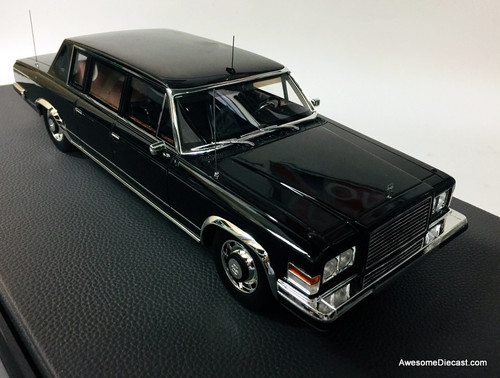