It comes with a certificate of authenticity

The GM New Look bus is a municipal transit bus that was introduced in 1958 by the Truck and Coach Division of General Motors to replace the company's previous coach, retroactively known as the GM "old-look" transit bus.

Also commonly known by the nickname "Fishbowl" (for its original six-piece rounded windshield, later replaced by a two-piece curved pane), it was produced until 1977 in the US, and until 1985 in Canada. More than 44,000 New Look buses were built. Its high production figures and long service career made it an iconic North American transit bus. The design is listed as U.S. Patent D182,998 by Roland E. Gegoux and William P. Strong. 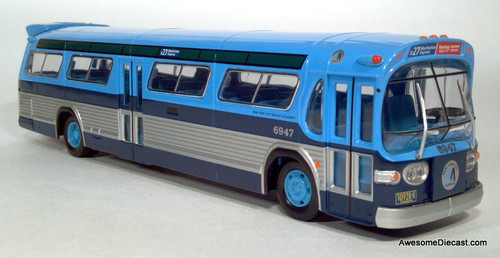