The Bentley Continental GT is a grand tourer manufactured and marketed by British automaker Bentley Motors since 2003. It was the first car released by Bentley under Volkswagen AG management, after the company's acquisition in 1998, and the first Bentley to employ mass production manufacturing techniques.

The vehicle debuted in 2003 at the Geneva Motor Show, followed by Le Mans, the 2003 Goodwood Festival of Speed and the 2003 annual Bentley Drivers Club meeting at Silverstone. The car differed from the previous Continental R & T models in terms of its concept: although much of the car is hand assembled, it is a mass-produced car made in significantly larger numbers. It is not a coach-built car. The price at launch was less than half the price of the Continental R, giving the car a wider customer base.

The press release announcing a third-generation Continental GT was made on 29 August 2017. The model made its physical debut when it was unveiled at the 2017 Frankfurt Motor Show where it drew a huge crowd Production began in 2018 with a base price of GB£156,700. In January 2019, Bentley announced it would celebrate its 100th birthday with a limited-edition car, likely based on the Continental GT, to debut at the Geneva auto show. November 2018 saw the debut of a 2019 Bentley Continental GT Convertible, to go on sale in 2019.

The model shares the Volkswagen-developed MSB platform with the second-generation Porsche Panamera. Compared to previous models, the car features a lighter body (>80 kg (176.4 lb)), an extended wheelbase (135 mm (5.3 in)), a 48-volt roll-control system and a new 6.0-litre W12 TSI engine, as well as a significant interior overhaul including an industry first rotating display. The Continental GT is the first production car ever to have an entire body side made from the Super Formed process; a precision technique with aluminium which allows more complex, sharply defined body lines. Unlike prior models, the panels are "superformed" with heated aluminum sheets molded by gas instead of a stamp. Manufacturer's figures indicate 0–60 mph takes 3.6 seconds (3.7 seconds 0–100 km/h) and it is capable of reaching a top speed of 333 km/h (207 mph). The W12 engine – designed, developed, and handbuilt in Crewe – is a further enhanced version of the TSI engine launched in the Bentayga in 2016. Featuring high- and low- pressure direct fuel injection, a variable displacement system, stop-start technology and launch mode, the powertrain produces 635 PS (626 hp) and 900 N⋅m (664 lb⋅ft) of torque. 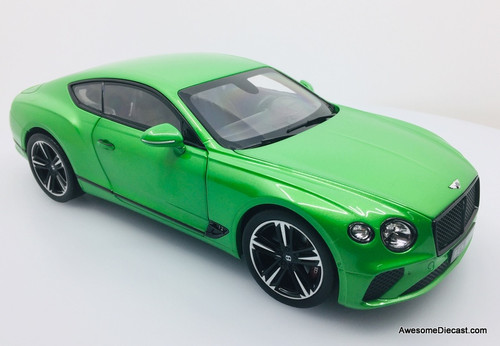