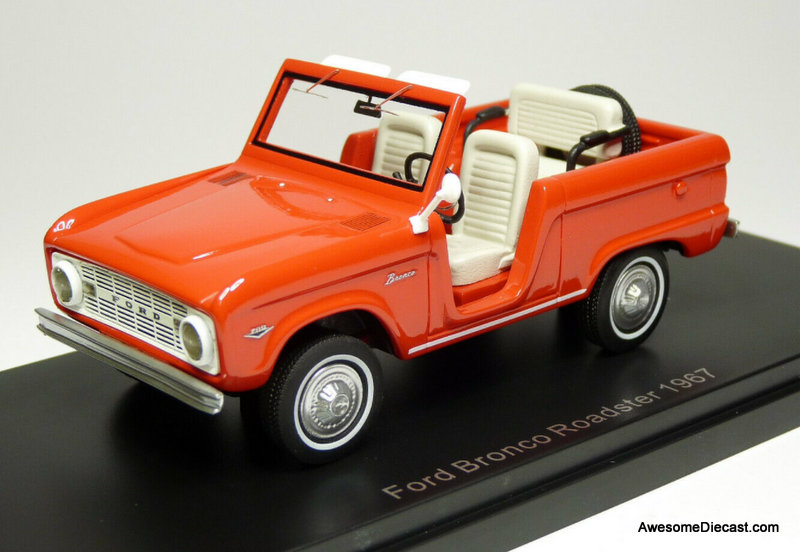 The Ford Bronco is a model line of sport utility vehicles manufactured and marketed by Ford. The first SUV model developed by the company, five generations of the Bronco were sold from the 1966 to 1996 model years. A sixth generation of the model line is sold from the 2021 model year. The nameplate has been used on other Ford SUVs, including the 1984-1990 Ford Bronco II compact SUV and the 2021 Ford Bronco Sport compact CUV.

The idea behind the Bronco began with Ford product manager Donald N. Frey in the early 1960s (who also conceived the Ford Mustang) and engineered by Ford engineer Paul G. Axelrad, with Lee Iacocca approving the final model for production in February 1964, after the first clay models were built in mid-1963. Developed as an off-road vehicle (ORV), the Bronco was intended as a competitor for the Jeep CJ-5, International Harvester Scout and Toyota Land Cruiser. Today a compact SUV in terms of size, Ford marketing shows a very early example of promoting a civilian off-roader as a "Sports Utility" (the two-door pickup version).

Initially selling well, following the introduction of the Chevrolet Blazer, Jeep Cherokee, and International Scout II (from 1969 to 1974), demand shifted towards SUVs with better on-road capability, leading to a decline in demand for the Bronco.

In a central theme of the first-generation Bronco, styling was subordinated to simplicity and economy, so all glass was flat, bumpers were straight C-sections, and the left and right door skins were symmetrical (prior to the fitment of door-mounting hardware).

For 1966, three Bronco body configurations were offered, including a two-door wagon and half-cab pickup, and open-body roadster. At its $2,194 base price ($17,507 in 2018 dollars), the Bronco included few amenities as standard. However, a large number of options were offered through both Ford and its dealers, including front bucket seats, a rear bench seat, a tachometer, and a CB radio, as well as functional items such as a tow bar, an auxiliary gas tank, a power take-off, a snowplow, a winch, and a posthole digger.[11] Aftermarket accessories included campers, overdrive units, and the usual array of wheels, tires, chassis, and engine parts for increased performance.

For 1967, Ford introduced the Sport option package for the Bronco wagon. Consisting primarily of chrome exterior trim and wheelcovers, the Sport package was distinguished by red-painted FORD grille lettering. For 1970, the Bronco Sport became a freestanding model rather than an option package

This is a resin model which comes mounted on a base and displayed in an acrylic case The Buick Electra is a full-size luxury car manufactured and marketed by Buick from 1959 to 1990 over six...

The Boeing 737 is a narrow-body aircraft produced by Boeing at its Renton Factory in Washington. Developed to supplement the Boeing 727 on short and thin routes, the twinjet retains the 707 fuselage...