Coinciding with a change in design regulations and the downsizing of Cadillac sedans, the Commercial Chassis was phased out as a distinct product line. The professional car basis would be continued by the Series 75 and successor flagship Cadillac sedans to current production.

The Cadillac Commercial Chassis is a variant of the GM D-body specifically developed for professional car use; most applications included funeral coaches (hearses), ambulances, and combination cars. In contrast to the Cadillac 75 (a factory-built limousine), the Commercial Chassis was designed with a heavier-duty frame; to improve access to the rear cargo area, the rear frame rails were positioned lower than a standard D-body.

Produced by Cadillac as an "incomplete vehicle", the rolling chassis was fitted with no bodywork aft of the dashboard. While fitted with all road controls and front body trim (and air conditioning, if specified), all bodywork from the dashboard rearward was completed by coachbuilders using the chassis as a basis for a completed vehicle; to aid body fabrication, front door shells and rear quarter panels were shipped to the coachbuilders (separate from the chassis).

Before World War II, the Commercial Chassis used the longest wheelbase of any GM sedan-based vehicle, ranging up to 165 inches in 1940. During the 1950s and 1960s, the chassis used a 156-inch wheelbase, with the 1971-1976 chassis reaching a 157.5-inch length. The powertrain was shared with the Series 75 through its entire production. 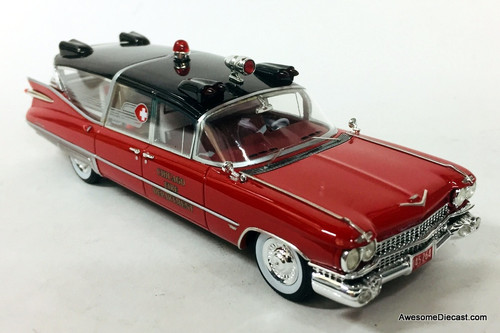