The Lamborghini Sián FKP 37 is a mid-engine hybrid sports car produced by the Italian automotive manufacturer Lamborghini. Unveiled online on 3 September 2019, the Sián is the first hybrid production vehicle produced by the brand.

The name Sián comes from a Bolognese word which means a flash of lightning. The name was selected to highlight the fact that the car is the first hybrid vehicle produced by the company, as well as possibly to stress the fact that it's the company's most powerful production car. FKP 37 are the initials of the late Volkswagen Group chairman Ferdinand Karl Piëch.

Based on the Lamborghini Aventador, the Sián FKP 37 shares its engine with the SVJ variant of the Aventador, but an electric motor integrated into the gearbox adds another 25 kW to the power output. Other modifications to the engine include the addition of titanium intake valves, a reconfigured ECU and a new exhaust system raising the power output to 577 kW. The total power output is 602 kW, making the Sián the most powerful production Lamborghini. The engine is connected to a 7-speed automated manual transmission and the car employs an electronically controlled all-wheel-drive system with a rear mechanical self-locking differential for improved handling.

The power for the electric motor is stored in a supercapacitor unit instead of conventional lithium-ion batteries. The supercapacitor unit is integrated with the electric motor into the gearbox in order for a better weight distribution. Supercapacitors were chosen due to their ability to provide three times the power of a conventional lithium-ion battery of the same weight. The unit installed in the car is an evolution of the Aventador's starter motor and can store ten times more power than the unit it is based on. A regenerative braking system helps generate enough energy to recharge the supercapacitors. The electric motor counters the effect of deceleration and provides a power boost to the driver at speeds up to 130 km/h. The motor supports low-speed manoeuvres such as parking and reversing.

The improvements made to the car accelerate it from 0 to 100 km/h in 2.8 seconds and attain an electronically limited top speed of 350 km/h but the official top speed is to be confirmed.

The exterior design incorporates a wedge shape, a trademark of famed automobile designer Marcello Gandini and mixes that with the design of the Terzo Millennio concept introduced two years prior. The Y shaped daytime running headlights are inspired by the Terzo Millennio while at the rear an active fixed rear wing with the number "63" embossed on its winglets to honour the company's year of incorporation creates downforce. Downforce is maximised by the model's prominent side air intakes and large carbon-fibre front splitter. A transparent "Peroscopio" glass panel runs from the centre of the roof and rolls back into the slatted engine cover adds light and visibility for the occupants, and the six hexagonal taillights are an inspiration from the Countach.

Along with the wing, active cooling vanes at the rear are used which are activated by a smart material that reacts to heat. When a certain temperature is reached, the vanes rotate for extra airflow.

The interior is based heavily on the Aventador's interior, but the centre console has been tidied up and a portrait touchscreen first seen in the Huracán Evo is one of the key differences. The leather upholstery has been done by Poltrona Frau, an Italian furniture company and 3D printed parts are used on the interior for the first time 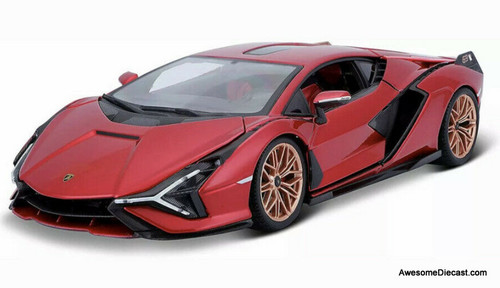