The Chevrolet Corvette (C8) is the eighth generation of the Corvette sports car manufactured by American automobile manufacturer Chevrolet. Following several experimental CERV prototype vehicles, it is the first mid-engine Corvette since the model's introduction in 1953 (as well as GM's first production mid-engine sports car since the Pontiac Fiero was discontinued in 1988), differing from the traditional front-engine design. The C8 was announced in April 2019, and the coupe made its official debut on July 18, 2019 during a media event at the Kennedy Space Center (referencing its association with NASA) to coincide with the 50th anniversary of the Apollo 11 mission. The convertible made its debut in October 2019 alongside the racing version, the C8.R. Production officially began on February 3, 2020, delayed by the 2019 General Motors strike.

The C8 retains some design elements found on the C7, but the majority of the exterior has been completely overhauled. The engine's repositioning necessitated a stronger focus on aerodynamics and cooling; large side scoops house air intakes, and the rear features smaller vents below the taillights. A trunk is located at the rear, with additional storage space at the front of the car. Combined, these provide 13 cubic feet (370 L) of cargo space, 2 cubic feet (57 L) less than that of the C7. As a result of the switch to a mid-engine layout, the passenger cell has been shifted forward by 16.5 inches (420 mm). The C8 is also offered in both left and right hand drive configurations, another first for the Corvette. The cockpit has been designed to be driver-centric, with numerous controls mounted on the center console as well as utilizing a new hexagonal steering wheel. A 12 in (30.5 cm) digital screen replaces the instrument cluster and reflects one of the six driving modes selected, and is accompanied by an 8 in (20.3 cm) touchscreen. A special Z button (a homage to the Z06, ZR1 and Z51) is also mounted on the steering wheel; this can quickly activate customized performance settings. Models equipped with the available magnetorheological dampers will also offer adjustable suspension settings.

For the first time since the 1953 Corvette (C1), the current generation Corvette is offered in right-hand-drive configuration for the Japanese and UK markets. After the pre-sale announcement, 300 right-hand-drive Corvettes were sold within sixty hours: a record for the Corvette sales in Japan and three times the annual sales number for its left-hand-drive predecessor. 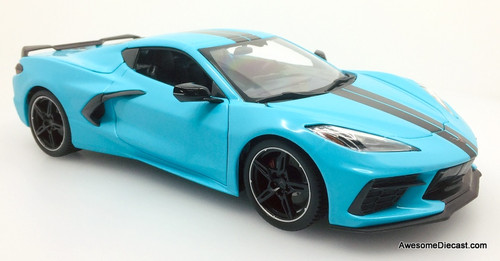