The second-generation Chevrolet Camaro is an American pony car that was produced by Chevrolet from 1970 through the 1981 model years. It was introduced in the spring of 1970. Build information for model 123-12487 was released to the assembly plants in February of that same year. It was longer, lower, and wider than the first generation Camaro. A convertible, which was available for the first generation, was unavailable for the second. GM engineers have said the second generation is much more of "A Driver's Car" than its predecessor

The 1971 Camaro received only minor appearance changes from its 1970 counterpart. Inside, new high-back Strato bucket seats with built-in headrests replaced the 1970-only low-back seats with adjustable headrests. The biggest changes came under the hood, due to a GM-corporate mandate that all engines be designed to run on lower-octane regular-leaded, low-lead, or unleaded gasoline, necessitating reductions in compression ratios and horsepower ratings. The 250 cu in (4.1 L) straight-6, 307 cu in (5.0 L) V8, and two-barrel 350 cu in (5.7 L) V8 were virtually unchanged, as they were low-compression regular-fuel engines in 1970 and previous years.

Production and sales dropped due to a 67-day corporate-wide strike at GM that coincided with the introduction of the 1971 models in late September 1970, along with a continued declining interest in the ponycar market fueled by skyrocketing insurance rates for high-performance cars. Rumors of the possible cancellation of the Camaro after 1972 began to surface and were nearly confirmed a year later when another worker's strike hit the assembly plant at Norwood, Ohio, which was the only plant building Camaros and Firebirds. 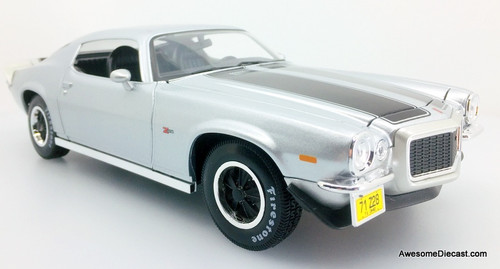