The Land Rover Defender (initially called the Land Rover Ninety and Land Rover One Ten) is a British four-wheel drive off-road vehicle developed in the 1980s from the original Land Rover series which was launched at the Amsterdam Motor Show in April 1948.

After a continuous run of 67 years production finally ended on 29 January 2016 when the last Land Rover Defender, with the number plate H166 HUE, rolled off the production line. A special edition Defender Works V8, with 400bhp, was announced in January 2018. The Defender was last sold in the US in 1997, after which safety regulations prohibited its sale in North America.

The next-generation Defender will come in two wheelbase sizes and feature a tailgate-mounted spare tire. Land Rover has confirmed that the all-new vehicle has entered the final stages of testing. The Defender will be available in the United States.

The biggest change to the Land Rover came in late 1990, when it became the Land Rover Defender, instead of the Land Rover 90 or 110. This was because in 1989 the company had introduced the Discovery model, requiring the original Land Rover to acquire a name. The Discovery also had a new turbodiesel engine, the 200TDi. This was also loosely based on the existing 2.5-litre turbo unit, and was built on the same production line, but had a modern alloy cylinder head, improved turbocharging, intercooling and direct injection. It retained the block, crankshaft, main bearings, cambelt system, and other ancillaries as the Diesel Turbo. The breather system included an oil separator filter to remove oil from the air in the system, thus finally solving the Diesel Turbo's main weakness of re-breathing its own sump oil. The 200Tdi, produced 107 hp (80 kW) and 195 lb⋅ft (264 N⋅m) of torque, which was nearly a 25% improvement on the engine it replaced (although as installed in the Defender the engine was de-tuned slightly from its original Discovery 111 hp (83 kW) specification due to changes associated with the turbo position and exhaust routing).

This engine finally allowed the Defender to cruise comfortably at high speeds, as well as tow heavy loads speedily on hills while still being economical. In theory it only replaced the older Diesel Turbo engine in the range, with the other four-cylinder engines (and the V8 petrol engine) still being available. However, the Tdi's combination of performance and economy meant that it took the vast majority of sales. Exceptions were the British Army and some commercial operators, who continued to buy vehicles with the 2.5-litre naturally aspirated diesel engine (in the army's case, this was because the Tdi was unable to be fitted with a 24 volt generator). Small numbers of V8-engined Defenders were sold to users in countries with low fuel costs or who required as much power as possible (such as in Defenders used as fire engines and ambulances).

Along with the 200Tdi engine, the 127's name was changed to the "Land Rover Defender 130". The wheelbase remained the same; the new figure was simply a tidying up exercise. More importantly, 130s were no longer built from "cut-and-shut" 110s, but had dedicated chassis built from scratch. The chassis retained the same basic structure as the 90 and 110 models, but with a longer wheelbase.

1994 saw another development of the Tdi engine, the 300Tdi. Although the 200Tdi had been a big step forward, it had been essentially a reworking of the old turbocharged diesel to accept a direct injection system. In contrast the 300Tdi was virtually new, despite the same capacity, and both the Defender and the Discovery had engines in the same state of tune, 111 bhp (83 kW), 195 lbf⋅ft (264 N⋅m).

Throughout the 1990s the vehicle attempted to climb more and more upmarket, while remaining true to its working roots. This trend was epitomised by limited-edition vehicles, such as the SV90 in 1992 with roll-over protection cage, alloy wheels and metallic paint and the 50th anniversary 90 in 1998, equipped with automatic transmission, air conditioning and Range Rover 4.0-litre V8 engine.

A new variant was the Defender 110 double cab, featuring a 4x4-style seating area, with an open pick up back. Although prototypes had been built in the Series days, it was not until the late 1990s that this vehicle finally reached production. 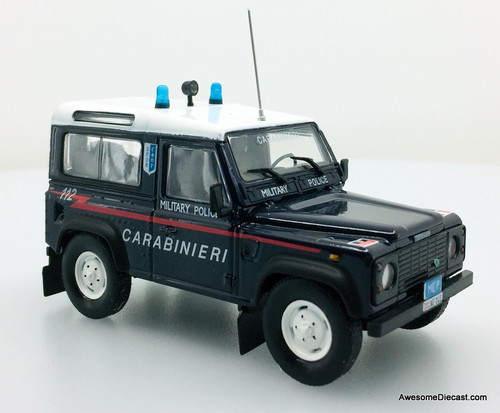