Büssing AG was established in 1903 in Braunschweig (Germany) by Heinrich Büssing, heir of a blacksmith dynasty and founder of many bicycle, engineering and railway signal works. From heavy duty trucks to omnibus and armoured cars, Büssing soon developed into one of the largest European producers. In 1923 it presented the first rigid three-axle chassis and the world’s first full-size bus which allowed Büssing to lead the market share in Germany in commercial vehicles. In 1934 Büssing took over NAG. After the Second World War civilian production was resumed and in 1950 the company name became Büssing Nutzkraftwagen GmbH while production was concentrated on underfloor-engined trucks.

The self-supporting bodywork was based on welded steel tubes and was fitted with a rear underfloor six inline diesel engine. Both city and long distance versions were made in different lengths and with different interior designs. Their names were changed regularly: Konsul, was followed by Senator, President and Prefekt. During the sixties they represented about 50% of all the buses in Germany. The Senator 12 D was presented in 1965 and gained an enlarged engine producing 150 HP. Their robustness and reliability combined with good performance allowed them to perform a very long working life with many still in service until the eighties. 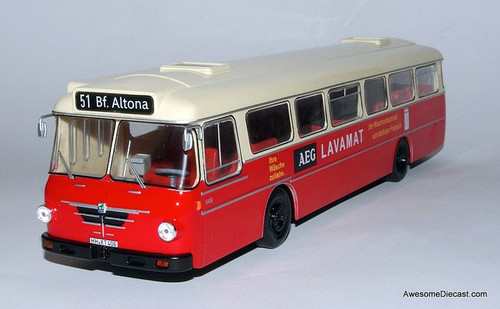