Mack Trucks, Inc., is an American truck manufacturing company and a former manufacturer of buses and trolley buses. Founded in 1900 as the Mack Brothers Company, it manufactured its first truck in 1907 and adopted its present name in 1922. Mack Trucks is a subsidiary of AB Volvo which purchased Mack along with Renault Trucks in 2000. After being founded in Brooklyn, New York, the company's headquarters were in Allentown, Pennsylvania, from 1905 to 2009 when they moved to Greensboro, North Carolina. The entire line of Mack products is still produced in Lower Macungie, Pennsylvania, with all powertrain produced in the Hagerstown, Maryland plant. They also have additional assembly plants in Pennsylvania, Australia, and Venezuela. There was also (previously) a Mack plant in Hayward, California.

Currently, the company's manufacturing facilities are located at Lehigh Valley Operations (LVO) formally known as the Macungie Assembly Operations Plant in Lower Macungie Township, Pennsylvania. Mack Trucks is one of the top producers in the vocational and on-road vehicle market, class 8 through class 13.

According to local historians, Mack transmissions, TC-15 transfer cases, and rear engine power take-offs are designed and manufactured in Hagerstown, Maryland, which was the original factory location.

Parts for Mack's right-hand-drive vehicles are produced in Brisbane, Australia, for worldwide distribution. Assembly for South America is done at Mack de Venezuela C.A., in Caracas, Venezuela. The Venezuela operation is a complete knock down (CKD) facility. Components are shipped from the United States to Caracas for final assembly.

In North America, a roll-off is a usually open top dumpster characterized by a rectangular footprint, utilizing wheels to facilitate rolling the dumpster in place. The container is designed to be transported by special roll-off trucks. Roll-offs are commonly used to contain loads of construction and demolition waste or other waste types. While most roll-off containers have a swinging door on the end for easier disposal of waste, some roll-off containers are not open top and are used with commercial or industrial trash compactors.

Construction debris may originate from a building site where something is being built, renovated, or demolished. Roll-off dumpsters are also used for various jobs that need much material to be taken away. The material in the roll-off may be taken to a landfill, recycled or disposed/recovered of in some other way. 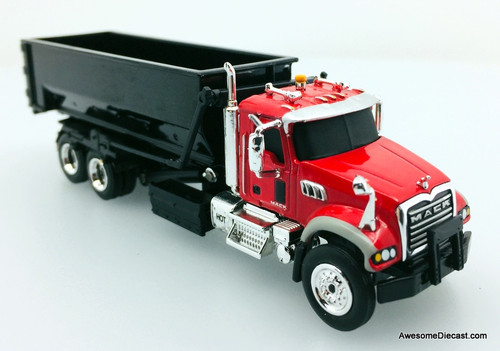