This model is part of a collection from an estate sale

The first generation of the GTO is credited as popularizing the muscle car market segment in the 1960s. The Pontiac GTO is considered by some to have started the trend with all four domestic automakers offering a variety of competing models.

General Motors redesigned its A-body line for 1968, with more curvaceous, semi-fastback styling, which was a revival of a streamlining on all GM products from 1942 until 1950 as demonstrated on the Pontiac Streamliner. The wheelbase was shortened to 112.0 in (2,845 mm) on all two-door models. Overall length was reduced 5.9 inches (150 mm) and height dropped half an inch (12 mm), but overall weight was up about 75 lb (34 kg). Pontiac abandoned the familiar vertically stacked headlights in favor of a horizontal layout, but made hidden headlights available at extra cost. The concealed headlights were a popular option. The signature hood scoop was replaced by dual scoops on either side of a prominent hood bulge extending rearward from the protruding nose.

A unique feature was the body-color Endura front bumper. It was designed to absorb impact without permanent deformation at low speeds. Pontiac touted this feature heavily in advertising, showing hammering at the bumper to no discernible effect. A GTO could be ordered with "Endura delete", in which case the Endura bumper would be replaced by a chrome front bumper and grille from the Pontiac LeMans.

Powertrain options remained substantially the same as in 1967, but the standard GTO engine's power rating rose to 350 hp (260 kW) at 5,000 rpm. At mid-year, a new Ram Air package, known as Ram Air II, became available. It included freer-breathing cylinder heads, round port exhaust, and the 041 cam. The 'official' power rating was not changed. Another carry-over from 1967 was the four-piston caliper disc brake option. However, most 1968 models had drum brakes all around. The 1968 model year was also the last year the GTOs offered separate crank-operated front door vents.

Concealed windshield wipers, which presented a cleaner appearance hidden below the rear edge of the hood, were standard on the GTO and other 1968 GM products after having been originally introduced on 1967 full-size Pontiacs. A popular option, actually introduced during the 1967 model year, was a hood-mounted tachometer, located in front of the windshield and lit for visibility at night. An in-dash tachometer was also available.

Redline bias-ply tires continued as standard equipment on the 1968 GTO, though they could be replaced by whitewall tires at no extra cost. A new option was radial tires for improved ride and handling. However, very few were delivered with the radial tires because of manufacturing problems encountered by the supplier B.F. Goodrich. The radial tire option was discontinued after 1968. Pontiac did not offer radial tires as a factory option on the GTO again until the 1974 model. 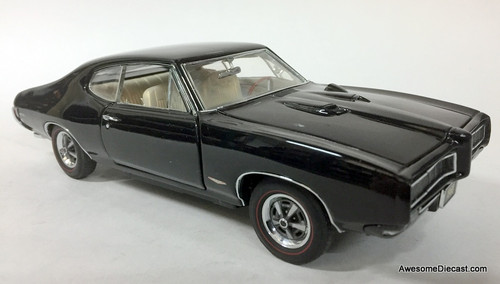